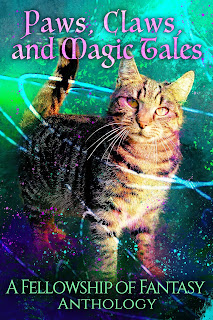 Whether you are a cat lover or just love to read a good story, you're sure to find something purr-fect in the Fellowship of Fantasy's fifth anthology, Paws, Claws, and Magic Tales! Enter the Rafflecopter below for a chance to win a paperback of this magical collection!

Here are the story blurbs to whet your appetite:

The Witching Hour by Savannah Jezowski: As shadows encroach on the city of Lite, one cat stands between humanity and the hounds of darkness. Will true love save the day?

Tale of Two Kitlings by Sharon Hughson: Two kitlings. One tail. A mother's sacrifice and a brother's betrayal. Who will survive the Siamese curse?

Black Knight by Laura L. Zimmerman: When a jingly bell goes missing, there's only one supercat to solve this crime--the mysterious Black Knight.

Sulfur and Sunshine by Grace Bridges: How to Handle a Dragon, Feline Edition. On a volcanic shore, the accidental appearance of a local fire-guardian has unusual consequences for a street cat.

The Magic of Catnip by A. J. Bakke: An impulse purchase of catnip leads to unexpected shenanigans.

The Secret Treasons of the World by J. L. Rowan: When Braelin stumbles upon an outlawed Guardian, she must choose between his safety and her own--and the cost may be more than she can bear.

The Poor Miller and the Cat by Leila Rose Foreman: When a poor miller rescues a cat, it promises to make him a wealthy man. But what is true wealth?

Alex the Cat and Alex the Prince by Ace G. Pilkington: The prince's parents are telling him he has to marry for money, and his cat says it could cost him his life.

Whisker Width by H. L. Burke: Get a cat, they said. It'll be fun, they said. No one mentioned the portals to a mysterious realm opening up in Kara's bathroom.

The Honorable Retrieval of Miss Sunbeam Honeydew by Pamela Sharp: When two princesses of the realm claim the same cat, how far will their loyal retainers go to see that each princess gets her way?

The Witch's Cat by Rachel Harris: Walk under ladders. October the 13th. A black cat. Perhaps the only way to bring two lovers together is through the worst luck.

The Cat-Dragon and the Unicorn by Janeen Ippolito: Ademis the cat-dragon only wants his freedom but must graciously help a scared unicorn girl who should be glad of his benevolent assistance.

Destined for Greatness by Jenelle L. Schmidt: Kendall knows he is destined for great things. The problem is, the Fates--even if they exist--don't seem to agree.

Sammy's Secret by Karin De Havin: A ring is lost. A friendship is ruined. A cadre of cats is on the case!

Death Always Collects by Jeremy Rodden: Loki, a regular old Siamese cat, finds Death looming to take his human. Bargain as much as you want, but remember: Death always collects.

The Wild Hunt by Naomi P. Cohen: When an immigrant violinist's music enchanted a Cait Sidhe, she's entangled in the secret world of the New York Fae.

Find on Goodreads or request an ARC copy

a Rafflecopter giveaway
Posted by Katy Huth Jones at 4:00 AM No comments: