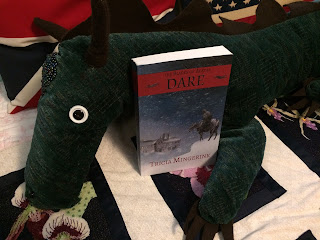 The Book Dragon has read Dare by Tricia Mingerink (Book One in the Blades of Acktar series) and gives it 5 claws!

My review: 4.5 stars for an interesting and compelling story set in a fantasy world that feels like a blend of a sort-of Regency era crossed with the Old West in the U.S., but it works. Especially the concept of the King's Blades. What made me keep reading, however, was the characters, from the young MC Third Blade Leith Torren to the also young Renna and her sister Brandi, all of whom are multilayered and sympathetic. This is apparently a young author's debut novel, but she's done a great job of sustaining suspense and interest while showing believable character growth. This is a clean read, suitable for young readers. The one thing I need to caution readers about is that it ends on a cliffhanger, which I wasn't expecting! I understand why authors do this...so you'll want to immediately read the next in the series, but speaking as a reader, it is a bit disappointing to be turning pages as fast as you can to find out what happens next to these nice people in danger, and---yikes! I still recommend it! The Christian elements are strong throughout but never heavy-handed. I'll read the next one...eventually, but my TBR pile will keep me busy for years.
Posted by Katy Huth Jones at 4:00 AM No comments: 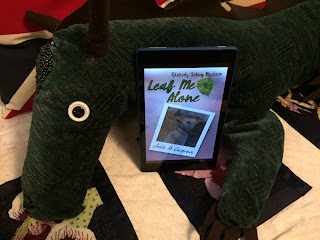 The Book Dragon has read Leaf Me Alone by Julie B. Cosgrove, the third in her Relatively Seeking Christian cozy mystery series based on genealogy and gives it a resounding five claws!

My review: Having read the previous two books in this interesting mystery series, I was eager to read the next installment. Leaf Me Alone is mostly from Shannon's POV, and she along with her husband Jayden travel from Texas to Florida to help her dying Bible study leader find her long-lost nephew. The plot is so deliciously twisty, I kept thinking I'd figured out where the author was going, only to be led in another exciting direction. As much as I love Bailey, Jessica, Chase, and Grady, I think this one is my favorite so far! The relationship between Shannon and Jayden was so real, and I enjoyed getting to "know" them better. If you like cozy mysteries, you  MUST read this series! Each book can stand alone, but they're even more fun read together, so you can make new friends with Shannon, Bailey, and Jessica!
Posted by Katy Huth Jones at 4:00 AM 1 comment: 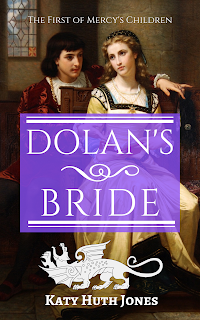 My last novel, Mercy's Joy, released in September of 2017. Right away I wanted to go back and finish a clean contemporary romance about two band directors I began 20 years ago, but those characters weren't talking to me. Then in one night, the outline for FIVE books in a new series based on Mercy's Children (one book for each of them) came into my head, fully formed! I took it as a sign I needed to write THOSE books!

And then my health spiraled downward yet again, leading to increased anxiety and inability to think, much less write. I was afraid my days of writing fiction were over.

But God was merciful again and again (as He has done my entire life) and not only were the health problems properly diagnosed, through the process of learning to manage them, my anxiety melted away and the words began to flow again! So, Book One in the new series, Mercy's Children, releases February 14, 2020, and I'm almost finished with the rough draft of Book Two, Joy's Sorrow.

Since I have to do my own formatting and covers now, I made all five covers at once (so I wouldn't forget how I'd done them--having chemo not once but twice has stolen a big portion of my short-term memory; I guess I'm related to Dory now). Ebook formatting is relatively straightforward, but paperback formatting is not, so I will have paperbacks eventually, but it might take awhile!!!!

To celebrate the release of Dolan's Bride, I've made each of the books in the He Who Finds Mercy series free one day at a time leading up to February 14th. Here's the schedule: 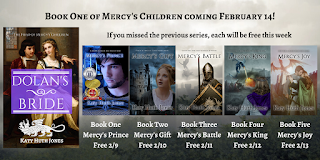 Thank you for celebrating with me! Here are the covers for the rest of the series: 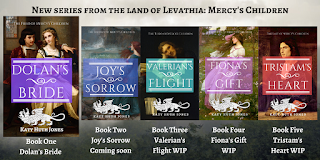 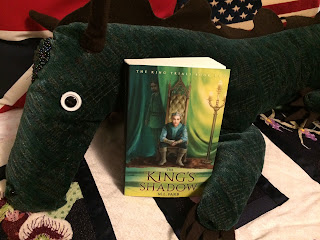 The Book Dragon has finished The King's Shadow by M. L. Farb (The King's Trial Book Two) and gives it 5 claws!

My review: 4.5 stars for an exciting sequel to the epic The King's Trial, which made Book Dragon's Top 10 reads of 2019. Most of the characters from the first book make at least a cameo appearance, but this story takes off on a different tangent with multiple dangers and challenges for young King Halavant, his brother Yosyph (known variously as the Shadow Demon and the Yorel), Lady Katrin, and the healer Elise, the four viewpoint characters. A good portion of Halavant's journey is spent with the Carani, and it felt like total immersion into their fascinating culture(s). There are several scenes of nail-biting tension while this reader worried about what would happen to her favorite characters, and many twists and turns keep the reader guessing and turning those pages as quickly as possible! The only (very minor) disappointment was that the climactic battle seemed to happen too quickly; I would have loved to "see" a bit more of the struggle. But the story line is fantastic, the sensory details lush and realistic, and it was satisfying to see Yosyph's faith grow through his trials, and also Halavant's unexpected growth. Recommended to anyone who likes Christian fantasy adventure! Suitable for all ages.

Here's a better picture of the gorgeous cover: 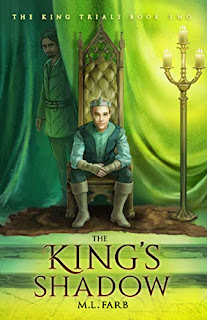 Posted by Katy Huth Jones at 4:00 AM No comments: