Monday Review by the Book Dragon: Fantasy of Mythological Proportions! 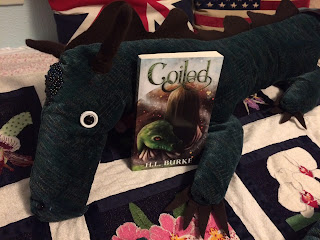 The Book Dragon has read Coiled by H. L. Burke and gives it 5 claws!

My review: "4.5 stars for a fantasy that slithers into your heart (and I already liked snakes). Coiled has such a strong feel of Greek mythology, it could easily be titled "The Labors of Laidra" so she could take her place in the pantheon of mythological heroes. The MC, Princess Laidra, is an extremely sympathetic, yet strong and selfless character (the three "S's," rather snake-like). The members of the supporting cast, including humans and gods and monsters, are all individually drawn yet have enough similarity to their Greek counterparts that the story feels familiar in a fresh new way.

"Recommended for older teens and up, especially those who like Greek mythology and/or snakes!"
Posted by Katy Huth Jones at 4:00 AM 2 comments:

Monday Review by the Book Dragon: A Purr-fect Fantasy Collection for Feline Lovers 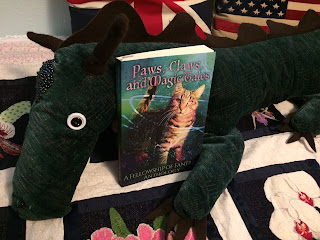 The Book Dragon has read the fantasy anthology Paws, Claws, and Magic Tales, 16 short stories collected by the Fellowship of Fantasy and gives it 5 claws!

My review: "4.5 stars for a fun anthology centered around cats. The stories are as different as cats, so there will be one to suit most any reader's taste. Some I liked more than others, but nearly all of them made me wish I had a cat, even though I've never had one! My favorite stories were "Destined for Greatness," "The Honorable Retrieval of Miss Sunbeam Honeydew," "Whisker Width," and "The Cat-Dragon and the Unicorn." But "The Magic of Catnip" was clever, and "Death Always Collects" was especially poignant, even without reading the author's note. Recommended for fantasy lovers, whether or not you are already a cat lover! (This book can make you one, in that case.)"
Posted by Katy Huth Jones at 4:00 AM 2 comments:

Monday Review by the Book Dragon: Knights and dragons and princesses...and zombies? 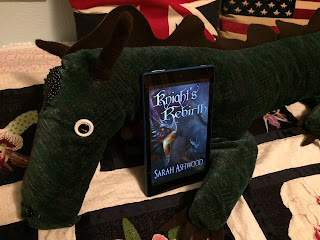 The Book Dragon has read Knight's Rebirth by Sarah Ashwood and gives it 5 claws!

My review: "4.5 stars for one of the most unusual and compelling stories I've ever read! Not your usual fantasy, but the two main characters became living, breathing people to me (well, one was breathing for some of the story, but I guess it wouldn't be a spoiler because he begins his story by telling you he's dead). If you like knights and dragons and princesses and a quirky love story, and adventure all over the place, including monsters and curses and mythology and zombies and life-and-death situations, you'll love this memorable tale!" 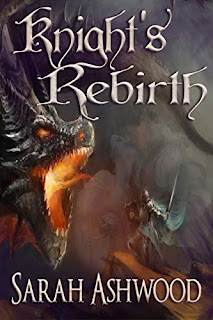 As part of a special blog tour for Fantasy Month, all of Book Dragon's reviews this month will be fantasy books! Check out this site for more info on this special event. 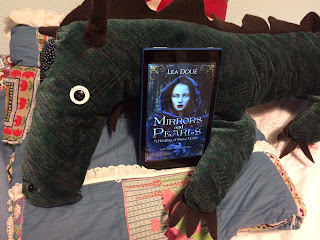 My review: "4.5 stars for a delightful and highly original retelling of Snow White. I loved the dragons and the pixie and the squirrel. The characters were so much fun, I wanted it to be longer. The ending felt a bit rushed, but don't let that stop you from reading this quirky, magical tale. It's SO much better than the Disney version. Recommended!" 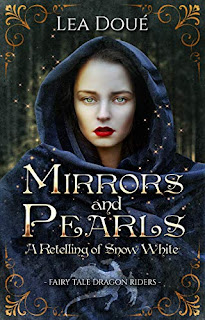 Here's a better picture of the lovely cover!
Posted by Katy Huth Jones at 4:00 AM 1 comment: