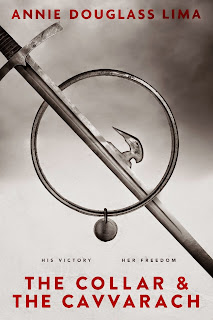 Today I have the privilege of interviewing one of my new favorite authors, Annie Douglass Lima whose newest YA, The Collar and the Cavvarach will be released tomorrow, May 9th.

Q: How did you get the idea for an empire with elements of modern technology mixed with slavery and gladiatorial contests?

Annie: I've had the idea growing in my mind for the last few years. It started as just a picture of the setting and its culture (with legalized slavery), and the plot and individual characters emerged little by little. The martial art of cavvara shil didn't enter my imagination until just before I started drafting.

Q: After reading the advance copy of The Collar and the Cavvarach, I looked up "cavvarach" to see if it was a real weapon and couldn't find it. Is there an inspiration for that?

Annie: I wanted to create a challenging martial art that was a combination of two or three different fighting styles, involving elements of unarmed combat as well as the use of a weapon. It took a few false starts before I had a fighting style I liked. At first I just pictured using a sword, but I wanted something a little less stereotypical. The cavvarach, with its hook, ended up being just right for what I had in mind. Combatants try to snag their opponent's hook to tug the weapon out of the other person's hand, which is one way to win a duel. (They can also knock it away with their own cavvarach, or kick it away.) Besides disarming an opponent, you can win by knocking them over and pinning their shoulders to the mat for five seconds.

Although this never gets mentioned in the book, I picture a cavvarach having been an ancient weapon of warfare thousands of years ago in that world. Warriors could fight with it much as they would with a sword, but the original purpose of the hook would have been to snag the legs of horses (when wielded by a warrior on foot) or to grab at enemy fighters and pull them off their horses or out of their chariots as they galloped past.


Q: Isn't this the novel you completed during last year's NaNoWriMo? If so, how did you manage to write an entire novel while teaching fifth grade? I'd love to know about your process.

Annie: I wrote the first (very rough) draft during NaNoWriMo in 2013, yes. And let me tell you, it was not an easy task to complete it while working as a full-time teacher! I love my day job and would never want to quit, but I often wish it left me with more time for writing. One of the secrets to my winning NaNo was getting up early and putting in an hour or two of writing before school started. Sometimes I set my alarm for as early as 4:30 a.m. Fortunately, I am a morning person, but it was still hard to get up that early! I pulled some late nights, too, and that was even harder for me. On Saturdays and Sundays I would often spend most of the afternoon writing at a little table outside one of our many neighborhood teashops. Since I didn't have Internet access there, it was easier to stay focused (and the convenient access to hazelnut milk tea and many of my other favorites didn't hurt either!).

Q: The descriptions of the martial arts contests in The Collar and the Cavvarach sound authentic. Are you a practitioner? Or just a very good researcher?

Annie: Designing cavvara shil (and the necessary training and practice for it, as well as rules of the tournament) took a LOT of research. This was one of the most challenging aspects of writing this book. I am not a martial artist myself, so it was all the more difficult to make sure this martial art was feasible and would make sense to readers who practice "real" martial arts. I spent hours researching online and in books, as well as talking to athletes I know. I'm glad to hear that after all that, it does sound authentic!

Q: I'm fascinated by your background, growing up in Kenya and now teaching in Taiwan. Where else have you lived or visited that made a big impression on you, and where would you like to live or visit?

Annie: I've been to a total of nineteen different countries and lived in four of them. Besides Kenya and Taiwan, Indonesia holds the biggest share of my heart. I once spent a year there, teaching in a one-room schoolhouse in a town at the edge of the jungle in New Guinea. What an unforgettable experience! I love to travel anywhere, though, and there's nowhere in the world that I would specifically not want to go. But Asia is my favorite continent to live in, and the next country on my bucket list to visit is Cambodia.

Q: Any plans for a sequel to The Collar and the Cavvarach? How about another book in your Alasia series?

Annie: Yes to both! I'm working on two more novels at the moment. King of Malorn will be the next one in the Annals of Alasia, and I'm hoping to have that published sometime this summer. The other one is The Gladiator and the Guard, which takes place four years after the events of The Collar and the Cavvarach. I drafted it last November (another NaNoWriMo project), but it still needs a LOT of work. I hope to have it ready for publication by about this time next year, but we'll see.

Thanks for stopping by, Annie! I really appreciate you letting me preview The Collar and the Cavvarach. (My review on Goodreads.) It's an excellent story and I hope MANY readers will discover this book as well as your other YA fantasy series, The Annals of Alasia, which have replaced Anne McCaffrey's Harper Hall Trilogy as my all-time favorite fantasy series. (And I can't wait to read King of Malorn!)

You can order The Collar and the Cavvarach on Amazon or Smashwords, and you can follow Annie: 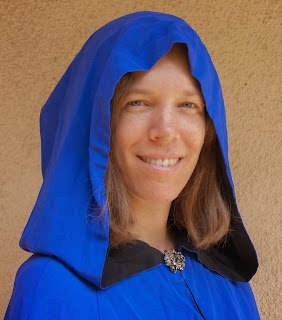