Monday Review by the Book Dragon: An imaginative fantasy full of magic and emotion

The Book Dragon has finished H. L. Burke's Ice and Fate duology (Book 1 is Daughter of Sun, Bride of Ice, and Book 2 is Prince of Stars, Son of Fate) and gives them both five claws!

My review: These are not two separate stories but an entire story told in two parts, so neither stands alone. I give the overall story 4.5 stars. At first I had trouble connecting with the MC Arynne, who is a princess, sister of the King of Solea, a land on the side of the world where the sun always shines. The other MC Kajik at first came across as full of himself, so I didn't much like him either. But I kept reading because the world building was so interesting, and both characters grew on me by the end of the second book. Kajik is from the side of the world where the sun never shines, and it was fun to see how the author delved into the differences between the two lands, making them feel real in every way.

There are several antagonists and minor characters who are well-drawn and add to the emotional depth of this story. Even though it's not my favorite of Burke's stories, it is memorable and well worth the read. Recommended to anyone who likes fantasy romance. I would rate it PG-13 for a couple scenes of sensuality, a few scenes of violence, and unrelenting bullying by an unreasonably harsh parent.

Here are better images of the very appropriate covers: 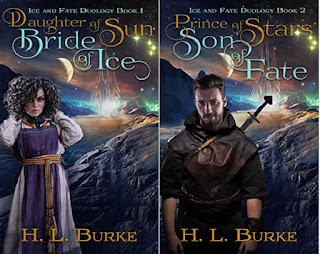