Monday Review by the Book Dragon: Heart-pounding suspense in this dystopian sequel! 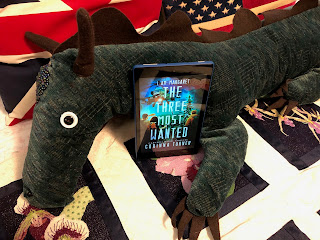 The Book Dragon has read Corinna Turner's The Three Most Wanted, the sequel to I Am Margaret, and gives it a resounding five claws!

My review: Oh, my heart! I think this second book was even better than the first! This story had the three heroes from I Am Margaret (Margaret/Margo, Bane, and Jon) in mortal peril the entire time and I could not turn the pages fast enough. The escapees from the Facility that wanted to Dismantle them are fleeing across the EuroBloc to the Free Vatican State. The Power-That-Be are furious about Margo's book as well as the escape, hence their branding as The Three Most Wanted. In their flight across the Continent, the three encounter dangers in the wilderness, dangers from betrayal, and have so many harrowing encounters, I could hardly bear to pause in reading. Their situation even entered my nightly dreams! An amazing blend of dystopian suspense and faith. Highly recommend!
Posted by Katy Huth Jones at 4:00 AM No comments: 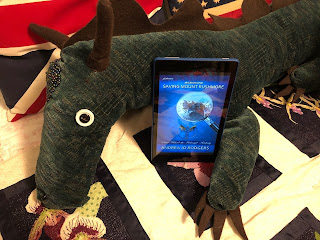 My review: 4.5 stars for a fun, action-packed fantasy mystery story that middle school-aged children will enjoy as a mystery while they're learning a little American history along the way. I love that the story is unashamedly patriotic with some spiritual warfare thrown in. The Saint Michael the Archangel Academy enlists gifted children for "missions" to help thwart the bad guys, and each of the four on Team Liberty are great role models for young readers. I would have loved this book in junior high, when "Jonny Quest" was my favorite cartoon. Recommended!

Note: This book and its sequel can be found at Catholic Teen Books.
Posted by Katy Huth Jones at 4:00 AM No comments: 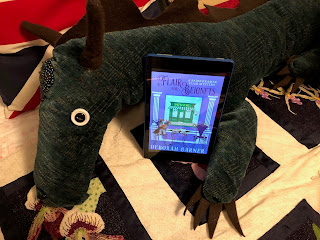 The Book Dragon has finished reading A Flair for Beignets (the third in the Sadie Kramer Flair mystery series) by Deborah Garner and gives it 5 claws.

My review: This is the first of Deborah Garner's books I have read, but it won't be the last. Mystery was never my favorite genre, but after reading several lately, I'm beginning to like the puzzle aspect of it. What makes this one a gem is the quirky MC Sadie Kramer, who is totally not my kind of person in real life, yet I find her fascinating enough to read an entire book about her. She actually reminds me of Miss Bianca (voiced by Eva Gabor in the old animated movie The Rescuers). Outwardly she appears to be merely another a wealthy California fashionista with a spoiled Yorkie she carries in a tote, but she has a good heart and a knack for unintentionally falling into situations--like witnessing the sudden death of the owner of her hotel at a nearby bakery when she's on vacation in New Orleans "to relax" from the pressures of owning a San Francisco boutique.

Even though this is the 3rd in a series, it is totally self-contained, and it actually makes me want to go back and read the other books. NOLA is colorfully and realistically portrayed. The supporting characters are all fully fleshed out and also colorful in their way. And the best thing was, I had NO idea who the murderer was, even though there were several I was sure HAD to be the one. What a fun book!
Posted by Katy Huth Jones at 4:00 AM No comments: