Dumber Than Dirt but One Lucky Pup


I’ve had many dogs in my life, but the one who’s lived with us the last fourteen years had a shaky beginning.


She came to us from the animal shelter.   My son Robert and I liked her because she sat quietly in her kennel, looking at us with big, sad eyes, while all the others were barking.  The lady at the animal shelter had tied a bandanna around her neck and called her Bandit, but Robert started calling her Bandi.

The shelter identified her as a “dachshund mix” but she looked more like part Corgi, part Sheltie, and the rest an impossibly long feathered tail which she held up like a sail at full mast.  Her hair was reddish gold and silky soft, and she had four white socks.

Bandi was a "chewer." She gnawed off the bottom corners of the back door frame (and, among other things, her dewclaws) but she wouldn't chew bones; she'd bury them, usually by uprooting plants I wanted to keep.  One evening our internet suddenly went out.  When we discovered the phone was dead, too, we checked the line into the house.  Using a flashlight, we found Bandi had pulled off the wire and eaten most of it.  After that when anything was missing, we assumed Bandi had eaten it.

We had a mesquite tree in the back yard.  The first notch where the branches divided was about four feet from the ground.  One day Bandi forgot she was a dog while chasing a squirrel.  She ran up the trunk and sat in the notch, barking at the squirrel who, of course, climbed much higher.

After that Bandi loved to show off for visitors, running up the rough trunk of the mesquite tree to sit in "her" place.  She also preferred to sit on top of her doghouse a la Snoopy rather than sleep inside. 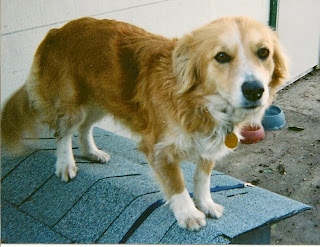 One evening when she was about eighteen months old, Bandi was in the backyard when it began to rain lightly and we could hear thunder far away.  She managed to open the gate and run around to the front porch.  Since she had a dog house and it was barely raining, we put her back in the yard and closed the gate.


A little while later, about ten o’clock, I heard a car race up the street, hit something, and then a dog crying.  I looked out the window and saw a dog pull itself up in the neighbor’s yard under the street light.  I thought, “How terrible!  Someone has hit a dog.”  And then I felt sick in the pit of my stomach.  I asked my husband to look outside and see if Bandi was in the yard.  She wasn’t.

I grabbed a big towel and ran outside in my nightgown.  Sure enough, it was Bandi.  I could tell she was in pain, but I couldn’t tell what her injuries were, so I wrapped her in the towel and carried her back to the house.  I laid her on the kitchen floor.  There was some blood, but not a lot.  She tried to bite us if we touched her back leg, and I thought she might have internal injuries.

My husband looked in the phone book and started calling veterinarians.  He found one on call who said to bring her in.  I thought we should all go, because I didn’t want to wake up Robert the next morning to tell him his dog was dead.

We woke Robert and he quickly dressed.  He and I sat in the back seat with Bandi while my husband drove across town.  Bandi was hurting so badly that she nipped at us whenever her leg was moved.  The vet didn’t think she had internal injuries, but he said her back thigh bone had snapped in two.  He would have to keep her so he could insert a rod in the leg the following morning.  He said to come back at four o’clock to pick her up.

When Robert and I arrived, Bandi heard us coming through the door.  I had read about “mournful howls” but that was the first time I’d heard one!  A cast held her back leg out straight, so she had to hop around on three legs.  Before her leg healed she managed to chew through the cast and had to get another one. 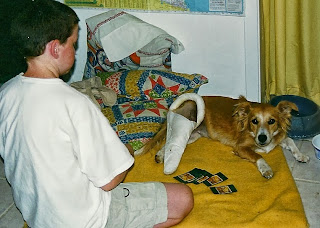 But I guess she’s a little smarter than dirt.  She doesn’t try to escape the backyard any more.  She knows bad things can happen outside the gate…. 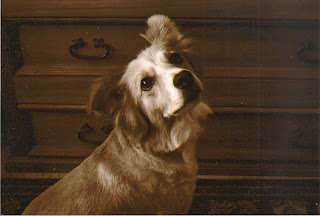