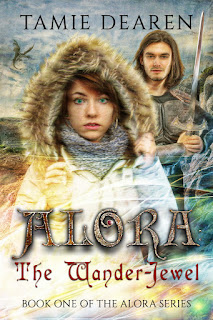 Today I get to interview the delightful Tamie Dearen, author of both YA fantasy ALORA: THE WANDER JEWEL, and clean romance.

Q: You've stated in other interviews that YA fantasy is your favorite genre to read. Did your initial idea for the Alora series begin with the characters or the setting?

TAMIE: When I started writing Alora, all I knew was that she was a fifteen-year-old living in Montana, who was born in another world and had special powers. And I knew that she would meet her soulmate, and their lives would depend on being together.

Q: Has the world-building for the land of Tenavae been a gradual evolution as the story has progressed, or did you have most of the details laid out before you actually began writing the first book?

TAMIE: The world-building definitely evolved as the story unfolded. I "discovered" Tenavae simultaneously with Alora.

Q: Your concept of "soul-mate" is unique, and I'm wondering if you made a conscious decision for Alora to be so young (15 instead of say, 18) in order to make the conflict arising from this unexpected magical relationship with Kaevin more complicated and stressful for their families?

TAMIE: Yes, I was purposeful in choosing Alora's age. I love the opportunity for Alora and her uncle to struggle with the new boundaries and relationships. Both of them have to grow and give a little to work things out. I also enjoy watching Uncle Charles acting as a father (without the help of his late wife). Like many fathers of teenaged girls, he's scared to death that he'll make the wrong decision, and he's not very good at expressing his sentiments when he feels threatened.

Q: Your writing style in ALORA: THE WANDER JEWEL is lyrical, and now that I know you've been composing music since age six, it makes sense! What kinds of music have you written? And which is your favorite instrument to play?

TAMIE: My main instrument is piano/keyboard, and I've written a number of piano compositions. But I've also written love songs, a few country songs, and quite a number of praise and worship songs.

Q: Although I wanted to focus more on Alora in this interview, I can't leave without bringing up your delightful romantic comedy series THE BEST GIRLS. I never liked romance until I read yours. How difficult is it to switch back and forth between writing contemporary romance and a fantasy world like Alora's? With your work schedule as a dentist, do you sometimes wish for longer periods of time to get "in the zone"?

TAMIE: The Best Girls Series is based on the personalities of my daughters and me. Since I know the characters so well, I found these books really easy to write. Many of the stories and conversations came out of real life events and dialogues. To make it even more fun, I wrote the books chapter by chapter and let my office staff read. So, we were constantly talking about Anne, Steven, Charlie, and Emily. Sometimes they would threaten me with bodily harm when I left them hanging.

The young adult fantasy books are much more complicated and challenging to write. Yet it's so exciting to create your own world and make your own rules. But I don't find it hard to switch back and forth. In fact, I wrote a romantic comedy, A ROSE IN BLOOM, posting each week on my blog as I wrote. Meanwhile, I was also writing the second book in the Alora series. (And the answer to your question about my work schedule is, "Yes, my job as a dentist interferes with my writing!") 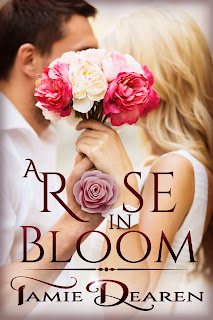 I know you were hoping to have a cover preview of second book in the series, ALORA: THE PORTAL, which will be published in August, but thanks for sharing this excerpt from ALORA: THE WANDER JEWEL, the first book in the series. I am eagerly awaiting the release of book 2. Thanks, Tamie!


Alora fought the urge to beat on the tile wall. He’d disappeared again. Who was this boy she kept seeing? Why did he only appear when she was in the shower? He seemed so real, and she could have sworn he looked as confused as she felt. As if he was trying to figure out who she was, as well. Was he a figment of her imagination? His eyes were so unusual. They were green. Not an ordinary green, but a deep, intense jade, the color of her aunt’s emerald ring. He was really cute, although he wore his wavy brown hair a little long for her taste. Yet she could only see his head—never his clothes or the background. Today he’d tied his hair back in a ponytail. Surely the fact he’d changed his hair was significant. Wouldn’t a figment of her imagination have his hair the same every time?
She peeked around the shower curtain at the clock on the bathroom counter. It was five a.m. on a Saturday, and she had chores to do, feeding the horses and letting the chickens out. But it was winter, so she had plenty of time to spare before the rising sun tolled the beginning of her responsibilities. Living on a ranch in the backcountry of Montana meant cold winters, lots of work, and little time for leisure. It was the only life she’d ever known, and she usually enjoyed it, despite the heavy work involved.
But right now, she wanted another stab at seeing that boy. The image was always so fuzzy. If only he wouldn’t disappear when she opened her eyes. She couldn’t summon his visage at will. He didn’t come every time she closed her eyes in the shower; it seemed to happen when she was relaxing and letting the water beat down on her head and shoulders. Maybe, if she were soaking in the tub, she might see his image again.
She pushed the curtain back, put in the stopper, and turned the faucet on full blast. As an afterthought, she added bubble bath, filling the tub with fragrant suds. Soon the bath was full, with aromatic bubbles foaming on top. She eased into the soothing water, closing her eyes at the blissful caress of the heat on her tight muscles. And she waited. Anticipating. Would he come? She tried to stay alert, but the relaxing warmth seeped into her skin, lulling her to sleep.
She awoke with a start to a tub of cold water. Disappointment formed a knot in her stomach—he’d never appeared. She released some water down the drain and added hot water, swirling it around until the temperature was comfortable again. She had five more minutes before she had to abandon her bath to start her workday. She lay back down, sinking below the water with her eyes closed, swishing the fresh water over her skin to remove the bubble bath film, her face floating above the surface to breathe.
He appeared. She held her breath, clamping her eyes shut tight, trying to hold the image as long as possible. Though the apparition was still slightly blurry, she could see all of him, head to toe. She took advantage of her increased perception, thoroughly studying his image. She almost clapped her hands when her mental measurement estimated his height at over six feet. At five feet ten, she was taller than most boys her age. But she scolded herself for examining him as if he were a potential boyfriend. He wasn’t even real. His clothes were made of supple-looking brown leather. The attire was odd—held together with ties and toggles rather than buttons or zippers. The fit was close enough that his well-formed muscles were evident. She noted his long hair was tied back, as it had been earlier. She could only see the front of him as he stood frozen, stock-still, with his mouth agape, his jewel-green eyes wide and... moving. His eyes were moving, up and down, as if he were scanning her body as she had done. And it occurred to her if she could see all of him, he might be able to see all of her.
She gasped, opening her eyes to dispense with the specter. But his image remained, now sharp and clear. And he seemed to be standing in her bathroom. She cowered under the water, attempting to hide under the few remaining bubbles. His eyes dropped down to her navel, and as they widened, he whispered, “Wendelle?”
She screamed at the top of her lungs, lunging for her towel on the floor. Hastily covering herself and preparing to leap from the tub, she looked up, only to discover the vision was gone—if indeed it had been a vision.