Today I am interviewing another wonderful author I met in the Clean Indie Reads group, Charissa Dufour.

Q: Your Amazon bio says you began writing when you were diagnosed with Chronic Fatigue Syndrome in the 8th grade and had to drop out of school for a while. Has that resolved? If there any advice you'd like to give other writers dealing with chronic health issues?

Charissa: Great question. I really appreciate that you already read my bio before writing your questions rather than asking me to regurgitate what is already in my bio. When I was diagnosed, CFS was in its infancy. As I look back and compare what I was going through and what they know now about the disease, I doubt they would diagnose me with it again. Either way, it doesn’t matter. It is just labels. I was very sick. Whatever I have, I can relapse. I still have to take care of myself and watch my sleep schedules. Not taking care of myself can result in a relapse.

As to writing suffering from chronic health issues, I just want to encourage them to not let it beat them. You have an invisible monster on your back that the average artist doesn’t. Your journey is that much harder, and no one knows your true struggles. Battle with all you’ve got, and use your struggle to your advantage. Those battles, the ones you win and the ones you lose, are meat for your art to feed on. Use them to your advantage.

The advice I give to all writers, regardless of background, is to write what you want to read. Others say write what you know. I don’t really get that. I write about a princess and space ships. I’ve never been in space. I’ve never been a princess. But I love to read about them. If your written doesn’t enthrall you, it won’t enthrall you’re reader. If a scene bores you, I guarantee it will bore your reader.

Q: Your world building in the Dothan Chronicles is full of wonderful details. What inspired the creation of this world and its very human characters?

Charissa: I have a horrible confession to make. The Dothan Chronicles originally came from reading a book and not liking how a plot line turned out. So I rewrote it. Then I threw my rewrite away and started over. And then I threw that one away and started over again. Eventually I got to what is published. To be honest, there is not a lot left from that original inspiration of someone else’s book. Technically speaking the original spark came from someone else’s work, but what isn’t?

What book isn’t the result of a writer looking at a painting or watching a movie and having the “light bulb” moment? I won’t say what book I was reading when mine came. That is my secret, and I will take it to my grave.

Q: Although I don't like vampire stories, I'm intrigued by the genesis of your "Series That Just Plain Sucks." Did you set it in Olympia, Washington for a specific reason, or because you grew up there? I've visited once, and it's a beautiful place.

Charissa: I set it there for a few reasons. One was for the very practical reason in that I went to high school there and therefore knew it intimately. It made it very easy to describe the environment and culture of the Pacific Northwest.

Another reason is that the series was originally created to make fun of Twilight. It stemmed from a conversation with my husband in which we asked the question “What if Stephanie Meyer got turned into a vampire and discovered they don’t actually sparkle?” For that reason, I wanted to set in near Forks, but in a place that I could describe accurately, unlike her.

For the final reason, I wanted to put it in a place that was logical for vampires to reside. I will hand it to Meyer, as bad as her books are, vampires in the PNW makes sense. There isn’t a lot of sunlight there and the days do tend to be short.

Q: I see you're a film and play actor. Is that you as Sylvia in the movie "Debt Man"? Do you think your acting experience helps in writing dialogue for your own characters?
Charissa: In some ways, my acting experience is a detriment. It results in me directing my characters in my head, and makes me want my readers to see the scene exactly as I see it. As a result I pour in descriptions, trying to explain things that don’t need to be explained. Thankfully I have an editor that pulls me back and takes phrases out. What would I do without her!

Q: What would you like readers to know about your new Void series? 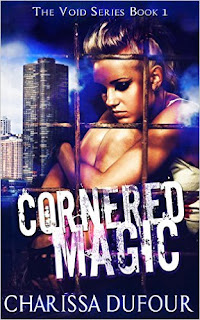 Charissa: My Void Series is such a fun romp through the Urban Fantasy genre. It centers on Sam Gollet, a half-fae Void. She has no powers of her own and is only able to take from the other mystical creatures around her. In this world, set in the near future, all mystical creatures—fae, vampires, werewolves, and mages—are known to mankind and reside inside Reservations under the control of the humans. Being the only Void in her Reservation, Sam is feared by all her fellow inmates.

In her debut story, Sam must travers the murky waters of her home while being called upon to solve the disappearance of a fellow fae.

Q: What else do you have for us in the pipeline?

Charissa: I am proud to announce the release of my very first Sci-Fi novella, Trust and Treachery, Book 1 of the Echoes of Sol series coming December 1, 2015.

Larissa Earnest, or Bit to her friends, is an indentured servant in a world where space travel is just becoming the norm.

Calen Macleef is a pilot of his family’s space freighter, travel the universe between the freshly terraformed planets and mining asteroids.

In a lucky hand of poker, Calen accidently wins himself a person. What will his brother, the captain, say when he brings a pretty young woman aboard the freighter full of merchant marines?
* * *
Find Charissa's books on Amazon.
Check out her author web page.
Follow her on Twitter.
Like her Facebook Author Page.