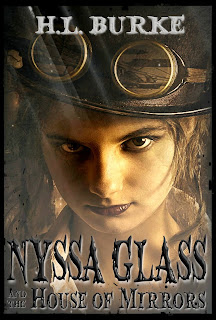 I haven't read much steampunk, but this book sounds so interesting, I've already pre-ordered it, and you can, too! Through March 14 ("pi" day) Nyssa Glass and the House of Mirrors is only 99 cents. After that it will be $2.99.

H. L. Burke is the author of several works of fantasy ... many of which involve dragons. Her latest is a YA Steampunk Novella, which she describes as Jules Verne meets Mary Shelley meets H. G. Wells.

Nyssa Glass and the House of Mirrors is set in an alternate world not completely unlike our world in the Victorian age … but with technology Jules Verne could only dream of, mostly powered by the Steampunk staples of coal and steam.
Within the world women wear corsets, high-button shoes, and veiled fascinator hats … along with their goggles (it's not Steampunk without goggles). The protagonist, Nyssa, is a reformed thief, plucked from a life of crime and retrained at Miss Pratchett's School for Mechanically Minded Maids to pursue an honest trade as a electrician's apprentice.
Technology in New Taured is advanced, due to geniuses like Professor Dalhart, who invented videophones so people can chat in real time through devices that resemble old fashioned, black and white television sets.
Dalhart's best technology, however, didn't make it to market before his untimely disappearance. His last projects centered around robotics. He was determined to fully mechanize menial labor and improve the quality of human life … but then, for reasons unknown, he shut himself in his mansion with his teenage son and almost two dozen members of his household staff and never came out again.
The loss of this great mind slowed technological development to a crawl. Dalhart's more business-minded but less creative partner, Mr. Rivera, continued to expand the company's line of videophones and radiosets. However, without the brilliant Dalhart, the next big innovation remained just out of reach.
Desperate to recover anything Dalhart left behind, Rivera and his many competitors began sending agents to Dalhart Manor, only to have them vanish as completely as Dalhart himself
In a world dependent on coal power, the promise of robots capable of mining, working 24/7 without rest and on limited fuel, would revolutionize New Taured. The man with this technology would be the country's de facto king. If only they could find a person skilled enough … or desperate enough … to brave the deathtrap known as Dalhart Manor. 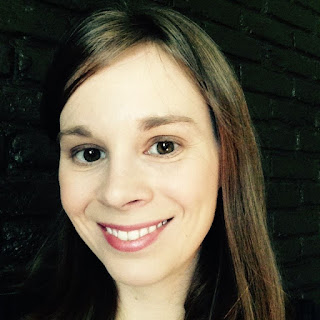 Author Bio:
Born in a small town in north central Oregon, H. L. Burke spent most of her childhood around trees and farm animals and was always accompanied by a book. Growing up with epic heroes from Middle Earth and Narnia keeping her company, she also became an incurable romantic.

Married to her high school crush who is now a US Marine, she has moved multiple times in her adult life but believes that home is wherever her husband, two daughters, and pets are.

She is the author of a four part fantasy/romance series entitled "The Scholar and the Dragon," YA/Fantasy "Beggar Magic," and MG/Fantasy "Thaddeus Whiskers and the Dragon," among others. Her current projects are a young adult Steampunk fantasy and an epic fantasy trilogy.