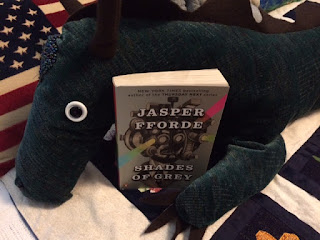 The Book Dragon has read Shades of Grey (no, not THAT one) by Jasper Fforde and gives it four claws! 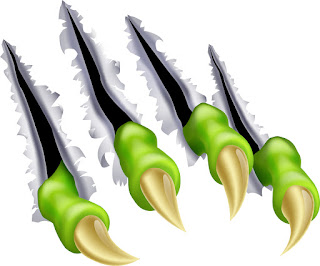 My review from Goodreads: "A friend loaned me this book, and it took me awhile to get into it. It's clever but sensory overload at first. I'm not a fan of dystopian fiction, but this one is quite different and worth a read. The last third of the book moves quickly and is un-put-down-able. The end is not the end, and I'm not sure I'll continue, but if I do, I'll have to rest my brain a bit first. Though full of witty satire and poignant sadness, this book is NOT escapist fiction; it makes one THINK."

NOTE: If you're curious about this book, know that there is one F-bomb and one S-bomb for effect, since in this society cursing is a crime punishable by a heavy fine. There is also some crude talk about premarital sex (called "youknow") and one instance when a young woman seduces the young man she plans to marry, but in a "fade to black" kind of way. Also, the sequels have not been published, so if you don't like to be left hanging at the end, you might want to wait and see if Mr. Fforde ever writes the rest of the story!
Posted by Katy Huth Jones at 7:59 AM