Rejoice with me! I finished my WIP! 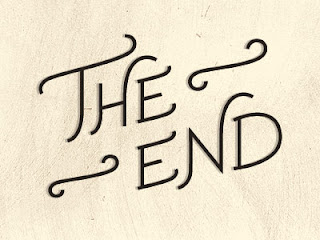 There were so many days in the last (almost) two years I thought I'd never type those words again, but I finally did on Dolan's Bride, the first of five planned books in a new series set in my fictional world of Levathia entitled Mercy's Children.

I only thought life was hard while fighting cancer (twice). But being forced to leave the life we'd built for 24 years in a small town to move to a huge metroplex and start over at our age, along with deteriorating health (the price of surviving cancer twice), and relearning newlywed tightwad techniques, since the only job hubby could find pays half his previous salary, and I'm too sick to work have challenged us WAY beyond our comfort zones. (Hmm, sorry about that extremely long sentence!)

We've learned valuable lessons from our trials and grown closer to the Lord, but we both still feel battered, two years later. We had zero traffic in our small town, but here we've had to learn to drive in crazy freeway traffic, which is quite frazzling to our old people nerves.

Despite feeling battered and frazzled most of the time, I kept slogging on, pretty much desperate to finish this story. It was scary when my characters wouldn't talk to me for days or weeks at a time. Some days I wrote one page or a couple paragraphs. After thirty years of writing for publication, I thought my fountain was completely drying up.

I don't submit manuscripts to book publishers or agents any more. They're looking for writers with "platforms" and past sales numbers that prove they can make money for them. That's even more important than making sure the story is actually worth publishing.

I want to self-publish Dolan's Bride for the readers who have been patiently waiting to read it, but I no longer have the funds to make it as close to perfect as possible. (I spent over $1,000 on each of the books in the previous series and will never make that money back: content editor, copy editor, formatter, cover designer, and map maker, not to mention the narrator for Mercy's Prince.) Thankfully I have a wonderful critique partner and several eager beta readers, one of whom says he is good at spotting typos and grammar errors, so I'll try to polish it as best I can.

I'll also have to format it myself, so sadly it won't be as "pretty" as the He Who Finds Mercy series. I am trying to create a decent cover, too, using the limited free tools at canva.com. I hope my readers understand! Here are two ideas, using old paintings in the public domain: 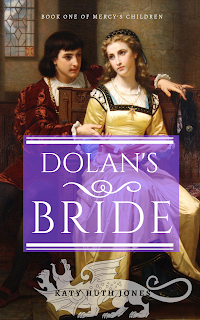 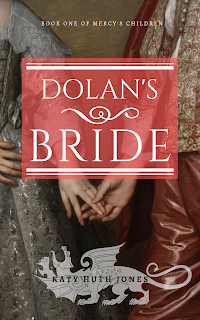 And here's a teaser (still working on an actual blurb):

Even though fifteen-year-old King Dolan d'Alden has an heir in his three-year-old brother, his Regency Council is pressuring him to marry. Lady Nelwina Gowen wants to be Dolan's queen so badly, she's willing to use any means to attain her goal. Any means.
Posted by Katy Huth Jones at 4:00 AM