Twenty years ago I wrote a little book about the Navajo Code Talkers of World War II, the result of research I did for a magazine article. The Code Talkers became my heroes, and I wanted to share their story with children, since there were no books on the subject for young readers.

I had no way of knowing how much this little book would S-T-R-E-T-C-H me!

First local teachers asked if I could speak to their classes about the Code Talkers. I made posters using USMC photos I'd obtained, maps of Dinetah (Navajo land) and the Pacific battles where they fought, and a set of large illustrated alphabet cards in English and Navajo, which is always the students' favorite part no matter how old they are. Gradually this painfully shy writer grew more comfortable with speaking to classrooms of children, sometimes two or three classes brought together. After all, this was a subject near and dear to my heart, and after a few minutes my passion would overcome my nervousness.

Word spread. I received more and more calls to speak about the Code Talkers. A friend across the state set up three school visits in two towns. I brought my posters and books to sell, since after each presentation there were always many people who wanted to buy the book. But these "school visits" turned out to be something way more than I had yet encountered.

At the first school, I had to speak to ALL the seventh and eighth graders in their gymnasium. Fortunately the bleachers were short, so even though the students spread out across the court, I could still "reach" them by walking across the front, holding up a poster in one hand and the microphone in the other. Constantly moving also helped use my nervous energy, so the little quaver in my voice wasn't so noticeable.

But at the high school I spoke from the stage in their auditorium. It wasn't ideal, but the small size made it cozier than it might have been. I used some of my visuals even though the students in back (who weren't paying attention anyway) couldn't see them.

Finally the librarian drove me to the next town. We were running late, so as soon as we parked I grabbed my heavy box of posters and books and rushed to the door. Out of breath, I entered a large auditorium packed with hundreds of people. I later learned that ALL of the students from sixth through twelfth grade were present, as well as people from the community who had seen the advertisement in the local paper!

To compound the situation, a handsome young man named Steve was up on stage holding a mic (comfortably, of course) and working the kids into a frenzy! He was a professional football player who'd graduated from this high school, and he was bragging about how he could bench press 475 pounds.

My knees turned to jelly. I literally lost my grip for a moment and sank to the floor in the foyer. I knew then I had two choices:  I could pass out (my preference) or march up on that stage without my visuals and pretend like I knew what I was doing!

After Steve answered the last question, the auditorium burst into thunderous applause. When the principal introduced me, I thought, "Why in the world did you put me AFTER Steve?" But while the more subdued applause began, I took a deep breath, tried to smile, and walked out to shake the principal's hand. I took the mic and tried to look confident, even though I was trembling all over.

I said, "Well, Steve is going to be a tough act to follow. After all, the most I ever bench pressed was 85 pounds." The kids laughed and clapped for me, and I no longer felt like I might faint.

The worst part was that I was so far above them I felt disconnected from the audience. I tried to make up for my lack of visuals by putting as much passion into my talk as I could. I pretended I was IN the audience and had never heard the story of the Navajo Code Talkers. Then I noticed an older man on the front row, probably a World War II veteran. He kept nodding his head, so I tried to speak to him after that.

Oddly enough, I saw fewer disinterested students in this huge audience than in the smaller one at the other high school. By the time I finished forty minutes later, I felt as if I'd run a marathon. But I sold all the books I'd brought to eager students, teachers, and community members. Even the adults enjoyed how I signed the books with their name spelled out in the Navajo alphabet.

Over the years this presentation evolved to where I used several overhead slides, and I even added a song I wrote for the Code Talkers to play on a recorder at the beginning. (My Navajo flute wasn't loud enough to be heard in a large group, and it's hard for me to play anyway because as a piccolo player I tend to blow too hard.) I learned it was a good way to quiet down unruly students and set the mood for what they were going to hear.

On more than one occasion, with no prior warning, I had to adjust my talk down to preschoolers and up to university anthropology students (because of a glitch in the "advertised" talk). I've spoken to DAR groups, Kiwanis, University Women, and other civic groups. I'm a nervous wreck before the presentation, but once I play my Code Talker song, I get "in the groove" and my nervousness is gone.

It's said more people fear public speaking than death, but I've lived through it, and it is definitely a fear which can be conquered. If this shy writer can do it, you can too! Why not S-T-R-E-T-C-H yourself? 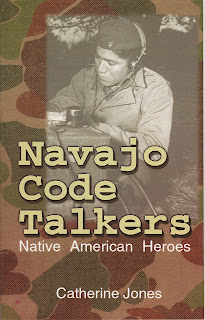