Hair and Back Again: A Hair-Razing Journey

Now that it's been over eight and a half years since I had nuclear-bomb strength chemo for fast-growing lymphoma, I don't mind people seeing what I looked like during that sickly time. If you know someone going through chemo, this might encourage them that their hair WILL grow back.

I wrote this poem about a year after chemo, and later published an article with Coping With Cancer magazine (link below), but this is mostly a photo journal.
I've always had long hair.
It was part of what defined me.

Hair doesn't make a person, though,
does it?

So why do I feel as different
on the inside
as I do on the outside? 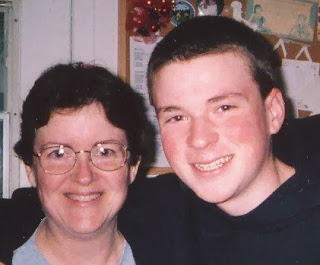 First I dyed my brown hair red
for fun, I said.

When the red hair began to fall out
I cut it short
to lessen the mess, I said.
Then it all poured off one day
except for two stubborn strands
and I shaved them so I could feel
that bald was my choice.

It wasn't.
For weeks I had three personas:
Long brown curly wig,
Short red sassy wig,
Scarf topped with hat.
Under each of them I hid,
trying to figure out who I had become.
At last the hair began to grow back
very
very
slowly.
Marine recruits had more than I did.
Hats were still my best friends.
Now it's longer, very curly
and people tell me, "Cute."
But still I mourn my old hair,
and the old me.
I did ask my oncologist if she'd put "Miracle Gro" in my chemo, because not only did my hair come back, I've stayed in remission for eight and a half years--and counting!

Link to Coping With Cancer article