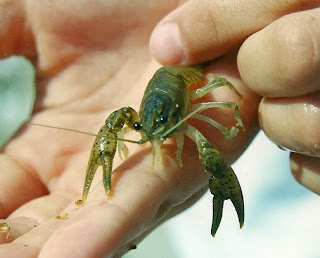 When I went to collect water plants for my aquarium at a place where a spring feeds into our river, little did I know I'd picked up an interesting hitchhiker.  After putting the plants in the aquarium, I noticed something tiny crawling along the bottom. I had to get a magnifying glass to be sure, but it looked like a transparent shrimp. Over the next few days this little crustacean molted more than once and it became apparent what it was:  a crayfish (otherwise known as a crawdad or "mud bug").

This little guy was fascinating to watch. He constantly moved around, using the tiny claws on his lesser legs to pick up bits of food and bring them to his mouth. He held his big claws immobile, unless he felt threatened. Then he'd rear up and hold them open, daring everyone and everything to come closer.


In a short time he grew to "eatin' size" and became king of the aquarium. I read that people feed lettuce to crayfish in captivity, but this one preferred fish food. I discovered that crayfish are escape artists after he went missing one day, and I finally found him resting on top of a wet towel on the bathroom floor, two rooms away!

I also learned that this crayfish was a male, so I searched at the river for a female, thinking (of course) that it was time for baby crayfish. The female laid eggs on her swimmerets (otherwise known as "in berry") and everything was going swimmingly until Mr. and Mrs. Crayfish had a BIG fight. I woke up one morning to discover that Mrs. Crayfish had pulled off Mr. Crayfish's claws during the night. He could still eat with his little feeding claws, but he sure looked pitiful.

I hoped that when Mr. Crayfish molted again his claws might regrow, but he didn't make it. Mrs. Crayfish died of a broken heart (or guilt?), without hatching eggs, so I had to start over with a new crayfish from the river.

This one was also good at squeezing through narrow spaces and I constantly had to put him back in the aquarium. One day, however, I couldn't find him. I searched the whole house and thought I was going to have to find him by the smell when he died (yuck) but when I turned on the clothes dryer, he shuffled out from under it.  He could hardly move because he'd been out of water all day, and because he was covered with dog hair. That's why I didn't see him when I shone the flashlight under the dryer. Oops—gotta vacuum under there, too. 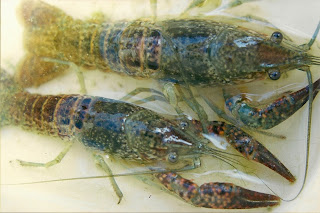 I must report that this, my last crayfish, also went to that bayou in the sky. He had a "mishap" when he molted and somehow managed to pull off both claws and end up with his gills outside his carapace instead of under it. He held on for two days, but I guess he couldn't "breathe" properly.

Because of my fascinating experiences with these funny little mud bugs, I can no longer eat crayfish. For me, at least, "crayfish are friends, not food." 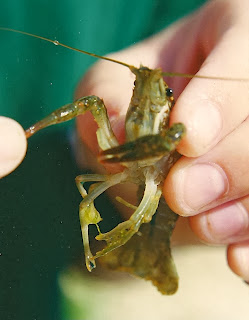