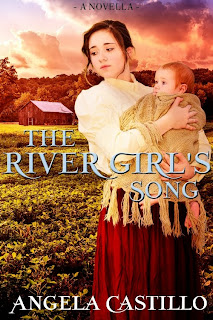 Q: In the acknowledgement of The River Girl's Song, you thank the mayor of Bastrop, Texas and the Pioneer Farm in Round Rock, Texas. Was that as part of your research or is this story based on an actual person or compilation of events?

ANGELA: This story is completely fictional but I did extensive research on my home town of Bastrop. I wanted to create a character who could have lived near the town and in the actual historic setting. I used buildings that you can still visit in Bastrop today, including the Methodist church. Zillia is actually a name from a Bastrop census in the 1880's.

Q: Your main character, Zillia, is so well crafted I keep wondering if she was a real person. Did you discover her gradually through the research, or was she the reason for the research?

ANGELA: Zillia is not a real person per se, but she is someone I created based on many aspects of the amazing women I have known in my life. I also drew from several of my own life experiences, especially the goats and some of the questions she has about God.

Q: With three children at home, how do you juggle writing with motherhood? Do you follow a schedule?

ANGELA: Not really. I try to devote a certain amount of time per day towards writing and getting the word out about my books, but it comes in spurts. Sometimes I'll spend an hour madly scribbling while the kids play in the backyard, and sometimes I won't write an original sentence for days. I do try to have a timeline of goals to work with. That works better for me than having something I have to do every single day.

Q: In each of your two books I've read so far you deftly weave gentle spiritual themes into your stories. Which genre do you find it easier to write from a Christian viewpoint, fantasy or historical? Do you prefer one over the other?

ANGELA: I really don't have a hard time with either one, because for me, my faith is such a part of who I am it kind of just flows in. I write fiction, but God is real and His truths never change, so I really don't have a hard time integrating it into either. My biggest challenge is trying to convey my thoughts in a way that the reader will understand what I am trying to say, but hopefully won't be too 'cheesy' or 'preachy.' I always try to write things that I would want to read.

I grew up reading both history and fantasy, pretty much in equal helpings, so I can't even say which one I like better.

Q: What is your next writing project?

ANGELA: I'm working on the next book in the "Texas Women of Faith" series, which will be about Soonie and her trip to North Texas to teach the children at a Comanche settlement. The 1890's was an extremely pivotal point for the Comanche people, and there is so much amazing history to work with. I could write ten books already!