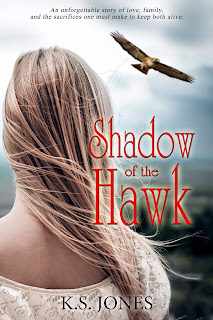 Today I'm interviewing K. S. (Karen) Jones, whose stunning debut YA historical novel SHADOW OF THE HAWK was released in February. Since she recently moved to Kerrville, I got to meet in her in person this week, and she is a lovely person with her own inspiring personal story.

Q: What gave you the initial idea for this story? Are any of the details inspired by actual events?

Karen: Shadow of the Hawk is a 1930s historical fiction story that came about by my fascination with the amazing people who lived during this trying time. My parents were just youngsters when America’s Great Depression hit, so their childhood memories were filled with immense personal struggles, as well as great admiration and compassion. Their parents (my grandparents) had to make life-changing decisions, which trickled down through generations. So, bits and pieces of their lives and their memories have touched this story. Many books set during this time period tell about people fleeing the Dust Bowl. But Shadow of the Hawk is different, because these folks stay on their farm, rather than migrating westward.

Q: Your details are so well drawn I feel as if I've traveled to 1932 Arkansas in a time machine. Did you live there? Or visit for research purposes?

Karen: Although Shadow of the Hawk is purely fictional, it does take place in a real town called Coaldale. Today, the town it is nothing more than a blip on an Arkansas map, but it does still have several homes, a church, and a cemetery. Coaldale is where my mother was born, and where she lived until she was about eight years old. I have visited Coaldale several times, including taking my mother on her last trip home. On that trip, we spent two days revisiting the sites she loved so much, and I was totally immersed in her memories. At that time, I still had a few years left before finishing this book, so our visit added a lot of flavor to the story. I had grown up listening to my mother’s vivid recollections of Coaldale, as well as life in general during the 1930s in both Arkansas and California, and her stories left an indelible impression upon me.

Q: The dialogue is so believable. How did your characters come alive for you? Were any born "fully grown" or did they develop over time as you did your research?

Karen: That's a great question, Katy. First, the vernacular used in this book is the same language I grew up listening to from my mother, father, aunts, uncles, and grandparents! It’s the real deal. And yes, the characters in this book most certainly “came alive” for the writing of this story. The main character in Shadow of the Hawk is sixteen-year-old Sooze Williams. However, when I began writing this story, it was Cora, her younger sister, whom I thought this story was about, so Sooze had a hard time pushing herself through. And, in fact, Sooze originally had a different name, and I could not get a handle on her personality. I just knew I had her name all wrong. My poor husband had to listen to me mumble and grumble about "that" not being her name. Then an interesting writer-thing happened. One day, out of sheer frustration, I shouted, "Tell me your name!" She stepped up and said, "My name is Sooze. Well, Susanna is my God-given name, but folks never call me by it." In amazement, I said, "Sue's? As in S-U-E-apostrophe-S?" and she said, "No, Mama says nothin’ ever really belongs to us except our beliefs and she didn't want to mislead me by giving me a possessive spelling, so she taught me to spell my name S-O-O-Z-E." From that moment on, Sooze and her story took off, and I just hung on for the ride.

Q: I know from my own experience that writing historical fiction is a lot of work searching for those details that firmly place the story in a certain time and place. Do you have a process? You mention on your blog that the research for Shadow of the Hawk "has spanned a lifetime." I'm curious about that.

Karen: Since the town of Coaldale, which is located on the Oklahoma/Arkansas border, is where my mother comes from, I grew up listening to all the stories surrounding her childhood. She loved Coaldale and the Ouachita Mountain area. And she had an interesting family. There never seemed to be a dull moment. Over twenty years ago, I began writing down her memories in minute detail. But then I realized that the memories of one person might not be the same memories that another person has, so I branched out.

It was important to me for this book to be a genuine, authentic representation of small town life in the 1930s, so I actually spent more than 15 years researching and writing this story. Part of my research included personal interviews and letters from folks who lived during that time, many from the Coaldale area. But this fictional tale goes one-step further than plain everyday life – it also includes a murder trial. That research plunged me into a whole other world! I spent many months researching the facts and experiences of real life court cases that occurred during that time, like the Scopes Trial, the Sweet Trial, and the trial of the Scottsboro Boys, among others. I studied actual trial transcripts, the summations, plus newspaper and personal eyewitness accounts, to frame up a realistic trial for Shadow of the Hawk.

Q: What are you working on now?

Karen: I recently finished a middle-grade fantasy set in the Southwest tentatively titled, The Talisman. It is currently under publisher's review. I am also putting finishing touches on another middle-grade fantasy which I hope to start marketing soon. After that comes the writing of a New Adult novel set in the beautiful Hill Country of Texas.

It's been a pleasure to get to know you better, Karen. I've read Shadow of the Hawk (here's my review) and I want to see your extraordinary book find a wide readership. All best wishes!

Where to buy SHADOW OF THE HAWK:

How to connect with Karen: