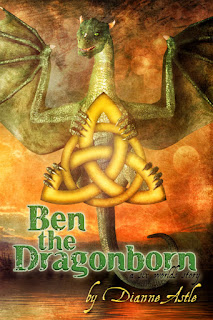 Q: Your title character in Ben the Dragonborn is so well crafted I keep wondering if he is based on a real boy. Did you discover him gradually through writing the book, or was he fully formed before you wrote the book?

DIANNE: When I started writing I just had a basic idea: Six Worlds under the care of one known as the Guardian, with schools on each world to train those chosen to do the Guardian’s work.  I did not have a clear idea of Ben when I started to write other than I knew he had to be unlikely hero.  I love stories of unlikely heroes. Perhaps it is because it is my own story.  I hope Ben’s story will encourage readers to look for the hidden treasure within themselves. We are all more than we realize.

Q: Which Scriptures or concepts from Scripture influenced your creation of the Six Worlds, the Guardians, and the Watchers?

DIANNE: Many of the stories in the Hebrew Scriptures are about unlikely heroes that God transforms into people who can accomplish God’s purpose in the world. In the New Testament we hear the story of how a group of unlikely disciples continued Jesus ministry after his death, many of whom suffered and died as martyrs.  Being a hero and following a quest sometimes has a cost, but the world is changed for the better when the cause is right. The words of Mary give us a clue as to the right causes; the poor are lifted from the dust and placed among the powerful. At the heart of Ben the Dragonborn is a scripture from Micah 6:8 which says: What does the Lord require of you but to do justice, and to love kindness, and to walk humbly with your God?

I did not write Ben the Dragonborn to be explicitly Christian fiction and so there is no one Savior, but there are people who are Christ-like in their willingness to sacrifice themselves to help change the world for others.   Like the Narnia series people can read Ben the Dragonborn without seeing the deeper magic in it, but for those with faith it is easy to see the Guardian as God and the Watchers and Chosen as servants of God.

My most amazing memory is of going out in a boat with over twenty other people to jig for fish. It is a twenty-three mile trip out and I was grateful for the opportunity. I went to the front of the boat by myself and sat in the spray so that I could offer God my thanks and praise in solitude. I praised God for the sea and the sky, for the fish below the sea, for my family and friends and for many other things in the hour that it took to get out to the fishing grounds.  As an afterthought I said, “God, please bless my fishing rod and this day of fishing.”

Now I need to tell you that I like fishing, but I’m not normally very good at it. I had taken this trip several times because it was affordable and I was lucky to come home with one or two fish.  I caught one fish after another that day. I kept the guides busy responding to my call of ‘fish on.’ I went home with a thousand dollars of worth of salmon, cod and halibut. I was the only person on the boat to catch halibut and I caught two. One was seventy-eight pounds.

I’ve tried to repeat that experience and it hasn’t worked. God knows that all I want to do is catch fish and I’m willing to do whatever it takes, even pray. My heart was in the right place that day and there was something about the way I handled the fishing rod that was difference from every other day before or after.  Since then I have been reminded that God is not willing to be manipulated by my prayers for something I don’t really need.

Q: Are you planning to write a book about each of the worlds in your Six Worlds series?

DIANNE: I am almost finished editing the sequel to Ben the Dragonborn which should be out by mid-July.  I think the book will be titled Ben and the Watcher of Zargon.  I have a third book in the series which is crying out to be written.  The ideas are popping and I’m getting excited about starting book three, but I won’t let myself write that book until the second one is finished.  When I complete book three we will see if there is any inspiration for book four.  That will depend on one of two things happening: 1. I am so inspired that I don’t care if anyone reads my book because I must give birth to the characters that demand to meet the world, or 2. Books one to three are selling well. If the series is selling well I will not want to disappoint my readers by ending the series at book three.

Me: I can't wait to read Ben and the Watcher of Zargon. And it would be really, really neat to visit you in Canada and go fishing! A girl can dream, can't she?

Learn more about Dianne and Ben at www.benthedragonborn.com and http://cleanindiereads.com/ben-the-dragonborn/

Ben the Dragonborn is available in paperback or kindle format at Amazon, and paperback at Barnes & Noble.