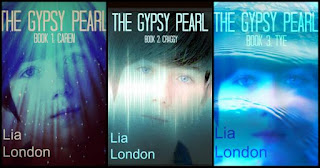 Today I get to interview one of my favorite authors, Lia London, who also founded the group Clean Indie Reads, of which I am a member. Thanks for stopping by, Lia!

Caz is the heart of this series, and you've created a strong teenager with believable motivations and reactions. Even while she experiences strange events all around her (and sometimes TO her) the reader can relate to her struggles and determination. She is so realistically complex that sometimes I want to hug her and other times shout, "Caz! What are you doing?" What was the inspiration for Caz, and how easy is it to get inside her head?

LIA: It’s funny that you should ask the question in that way because, when I started the story well over a year ago, I wrote in third person. The Gypsy Pearl actually began as a collaborative fiction exercise on a website I had at the time, but we didn’t get very far. Frankly, I didn’t like Caz much. She seemed like a whiny little troublemaker, and I wished she’d shape up. After I’d already written about ten chapters, I decided to go back and put the story into first person. Suddenly, I understood why she acted the way she did. Once I realized that she was just too smart and adventurous to live in the highly regulated, closed-minded little world of a space station, I wanted to help her get out of there and have some fun. Although I am not the physical risk-taker that she is, I can empathize with her curiosity and her interest in learning about new places and cultures.

How did you come up with the idea for the faneps? They are fascinating sentient creatures and King is a particularly interesting character.

LIA: The whole arc of the story came from a dream, but in that vision, the creature made a one-time appearance. A writer friend, Jan Jacob Mekes, suggested that the creature become more integral to the plot and gave me ideas for the fanep species culture, etc. I can’t imagine the story without King, so I am greatly indebted to Mekes.

Your world building for this series is terrific. The three world concept, the unique qualities of each planet, the differences and prejudices between ICS dwellers (spaceys) and Surface dwellers, all of it combine to make a gritty, realistic setting that transports the reader into your universe. What is your process of creating an entirely new reality?

LIA: Many of my favorite books feature elaborate world-building, so this was my chance to explore that aspect of writing. Also, I’ve been blessed with the opportunity to travel a lot in my life, particularly during formative years in my youth. Because I was allowed to look at foreign “worlds” through the unbiased eyes of a child, I think it changed the way I look at the world in general. I love my country and my culture, but I also can see why other countries developed different ways of doing things that worked for them. History, sociology, anthropology—these are interests of mine, and world-building allows me to work through some of my observations of things I see happening on good ol’ Earth. In terms of process, I ask a lot of “what ifs”. What if a colony only had this much land space? What if a colony were cut off from the archives of the past knowledge? What if the climate was brutal, but the money to be made was great? What if you never, ever left the walls of your space ship for your whole life?

I know you meant for this to be a trilogy, which makes sense since there are three worlds and three gifts, but do you have any plans for other stories set in this universe?

LIA: Actually, I thought it was going to be a novella! It grew, rather like Caz’s “rotation” on Caren, into something much bigger than expected. That was thanks to fellow author Ayd Instone, who suggested the whole Cycling Ceremony concept. In terms of moving on with this series… I won’t say never, but I have half a dozen other stories that are percolating in my brain more urgently, so I’ll need to get to them first.

You are such a wonderfully eclectic writer, and I love your sense of humor, yet you also write beautifully and memorably about more serious topics. What are your ideas for future books?

LIA: You are very kind! “Eclectic” is such a nice way of saying, “can’t make up her mind”! Most of the stories I’m sketching out now are for young adult and middle grade audiences. The two books that are most fully formulated in my mind are both in the fantasy genre. One, The Wedding Circle Wish, will see two tweens accidentally crash a fairy wedding, steal a wish, and have a startling transformation take place. It will be very silly and whimsical in nature. I’m hoping to have my own tween kids help me write it. The other, as yet without a working title, will be considerably longer and more complex. It’ll have a pre-industrial, magical feel with some intrigue and action wrapped around a coming-of-age story. I will definitely do some world-building with that one because I want to create some very different social paradigms to find out “what if…” The overall story arc is in my brain, but how I’ll get from point A to point Z will be an adventure for me as much as for my characters.

I've read all three Gypsy Pearl books, and I highly recommend them! Here are my reviews:

Check out all of Lia's books and visit her at lialondonbooks.com
and on Twitter: @lialondon1
Posted by Katy Huth Jones at 5:22 AM