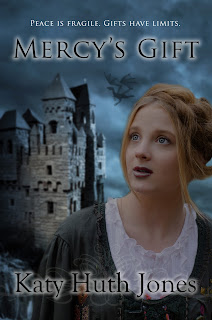 Cover reveal for MERCY'S GIFT, Book Two in the fantasy series He Who Finds Mercy:

Peace is fragile. Gifts have limits.

While Prince Valerian adjusts to marriage as well as his new title, conspiracy brews in the south among disgruntled lords who wish to separate from the north. The situation is made even more volatile by a charismatic rebel leader whose guerilla tactics are swift and brutal.

The clandestine efforts of a witch hired by one of the lords render Valerian's gift of Sight ineffective, and Merry's Healing efforts are sorely tested.

It has become dangerous for a northerner living in the south, and if the gifted young royals fail to stop the growing rebellion, evil will reign in Levathia. 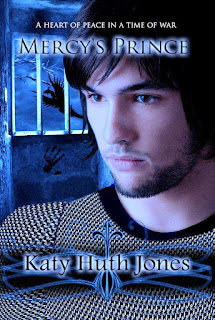 The story begins in Book One, MERCY'S PRINCE:

A heart of peace in a time of war

As second son of the King of Levathia, seventeen-year-old Valerian desires the quiet life of a scholarly monk. But when he fails to save his older brother in battle, Valerian must instead become crown prince.

While a traitorous knight schemes against him, Valerian meets Mercy, a pacifist Healer with whom he can speak mind-to-mind like the great dragons. Their bond emboldens Valerian to seek out the legendary dragons and ask for their help against the monsters who killed his brother.

Can Valerian survive the traitor’s assassins long enough to find the dragons? And if he does, can he convince them to lay aside their hatred of humans and help him save the land from destruction?

"Easily one of the best indie books I've ever read." Story Sanctuary

"The action is heart-stopping, the love is pure, and the emotions are real." Amazon reader

"A lovely, spiritual tale with all the adventure, mystery and romance a reader could want. Oh. And dragons!" Amazon reader

MERCY'S PRINCE will be FREE on Amazon September 17-19, and MERCY'S GIFT will be released September 25.
Posted by Katy Huth Jones at 2:00 AM