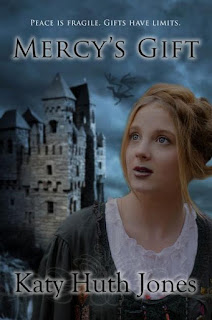 I feel like a distracted mother, not able to give her babies all the love and attention they deserve. It is enough, for me, that MERCY'S GIFT is here, and what an incredible journey it has been to get to this day.

As I mentioned back in July, upon the release of book one, MERCY'S PRINCE, I wrote the original version of this story more than 25 years ago. It was the second novel I'd tried to write, and although it was a little better than the first one, it was definitely NOT publishable. Even after several rewrites, it just didn't work, because I was forcing a plot upon cardboard characters.

It took the life-changing event of my father's final illness to "get it right" and only because I wasn't thinking "publication" but merely a writing exercise for myself to distract me from the agony of watching my Dad slip away, piece by piece, over the space of eleven months. I learned about grief; I learned about channeling that powerful emotion into words and images.

I wasn't even thinking "more than one book"--I was just literally letting my characters tell me a story. It soon become obvious that this WAS more than one book, so I rearranged a few things and found a good place to end Book One and eventually found a stopping place for Book Two as well.

Half-heartedly trying to please my beloved critique group, who urged me to find an agent, I sent out queries even while paying a content editor for Book One, which I now called Mercy's Prince. In the back of my mind, however, I was going to pay talented cover designer Perry Elisabeth the end of August 2015 to design a cover for Mercy's Prince and self-publish the book sometime in September. Meanwhile, I had planned to finish the rough draft of Book Three the second week of June while I tagged along to one of hubby's conventions. Three whole days of glorious writing, writing, writing! I was SO looking forward to it! Then I could send Book Three to my content editor while I finished Book Four the rest of the summer and hopefully make a dent on Book Five.

There's a Yiddish proverb that says, "Man plans, God laughs." I honestly don't think God was laughing at me, but my plans were suddenly and unexpectedly blown to bits, accompanied by excruciating pain. My non-Hodgkin's lymphoma, which had been in remission for ten years, decided to return with a vengeance.

During that awful several weeks of waiting on insurance to approve tests and pain meds(!), looking for a surgeon willing to risk a biopsy of ever-growing lymph nodes wrapped around my abdominal aorta, and expecting the worst (because the pain was SO bad--I kept having to take more and more opiates to keep it barely under control), I decided to find another cover designer and release Mercy's Prince, since it only needed formatting. If the worst was true, I didn't have long to live, so I wanted this book as my "good-bye" to friends and family. That was a dark, scary time that thankfully just feels like a faded nightmare now.
The lymphoma was "only" stage 3, and chemotherapy FINALLY began the middle of July with almost instant results. I hope to hear that precious word, "REMISSION" sometime in November. Meanwhile, I struggle to work on Books Three, Four and Five with chemo brain, with little success. So, even though I've managed to release Books One and Two, and I'm very happy with the way they turned out, the others will not be finished as quickly, because I do NOT want to release them until they're ready.

The series title is He Who Finds Mercy, but right now it feels more like SHE who finds mercy, because I'm still here, and the story is still in my head and my heart, if not yet on paper.
Posted by Katy Huth Jones at 9:41 AM