Fun Friday: The Case of the Missing Werecat

This is the last of my "plays" written for students in my writing classes. This was the smallest class I taught but an interesting collection of favorite fictional characters. I can tell by reading through these plays that they were written when the Pirates of the Caribbean was so popular, since Captain Jack Sparrow appears in most of them! 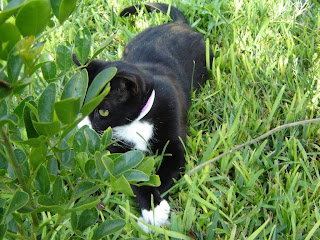 Scene 1   A street in town.  Enter SARAH-JANE  and NAPOLEON.

SARAH-JANE:  I really, really need your help, Napoleon.  My cousins, Timothy and Titus, are out of town this weekend, so the T.C.D.C. needs you.

NAPOLEON:  What’s a “teesy-deesy”?  Is that like a Ninja weapon or something?

SARAH-JANE:  No, no.  It stands for Three Cousins Detective Club.  We solve mysteries.

NAPOLEON:  But I don’t have any good skills.

SARAH-JANE:  What do you mean?

SARAH-JANE:  Oh, don’t worry, we’re just trying to find someone.  Or something.

NAPOLEON:  It’s pretty much my favorite animal.  It’s like a lion and a tiger mixed.  It’s bred for its skills in magic.

SARAH-JANE:  I think a werecat is much more dangerous.

NAPOLEON:  More dangerous than a liger?

SARAH-JANE:  Oh, yes.  Plus they are rare and hard to find.

NAPOLEON:  Then how are we going to find it?

SARAH-JANE:  Him.  His name is Solembum.

SARAH-JANE:  Good!  ‘Cause we need to get our other helpers.  (Enter JOHN)  Here’s one now.

JOHN:  (Cheerfully)  Top o’ the morning to you!

JOHN:  Quite an explosive name, that is.

SARAH-JANE:  We need your help to solve a mystery.

JOHN:  I love a good mystery!

NAPOLEON:  We’re looking for a werecat.  It’s like a liger but more dangerous.

JOHN:  Well, now, that answers a whole slew of questions, don’t it?

SARAH-JANE:  Will you help us, or not?

JOHN:  (Shrugs)  An Irishman nevers backs down from a challenge.  Besides, it’s me day off.

SARAH-JANE:  Oh, good!  Come on, we need to find one more person.

JOHN:  Good morning to you, sir.

PUDDLEGLUM:  Looks like rain before lunch if it doesn’t snow or hail first.

JOHN:  Well, sir, why so dull on such a bright morning?

PUDDLEGLUM:  The other Marsh-wiggles keep saying I’m too flighty.  They say I need to learn that there’s more to life than fricasseed frogs and eel pies.  How is that possible?

NAPOLEON:  I’m hungry, too.  You ever eat any tots?

PUDDLEGLUM:  Tots?  Do you bake them in a pie?

NAPOLEON:  No.  I just eat mine with ketchup.  By the way, I like your sweet hat.  I’m Napoleon.

PUDDLEGLUM:  Puddleglum’s my name.  But it doesn’t matter if you forget it.  I can always tell you again.

JOHN:  May I see your hand, sir?  (PUDDLEGLUM holds up his hand)  Why, you have webbing like a frog.  Is something wrong?

PUDDLEGLUM:  (Looking annoyed)  Nothing wrong with me.  Nothing frog with me.  I’m a respectabiggle.

SARAH-JANE:  Well, I like you even if you seem to be a wet blanket.  Will you help us find a werecat?

PUDDLEGLUM:    Got to start by finding it, have we?  Not allowed to start by looking for it, I suppose?

SARAH-JANE:  Oh, we’ll have to look for it first.  And I know just the man who can help us.  Will you come?

PUDDLEGLUM:  Might as well go as not.  Might catch some victuals while we’re at it, as long as we don’t faint with hunger first.

NAPOLEON:  I thought we were looking for a werecat.

SARAH-JANE:  We are.  But we need Captain Sparrow and his boat.

SPARROW:  Ship, love.  The Black Pearl is a ship.

SPARROW:  Who wants to know?

SARAH-JANE:  I’m Sarah-Jane Cooper.  These are my friends, and we’re looking for the werecat Solembum.

SARAH-JANE:  I have four dollars.

NAPOLEON:  I could get you some tots.

PUDDLEGLUM:  If I could catch some eels, I’d bake you a pie, but they take a mortal long time to cook.

SPARROW:  You call that treasure?

JOHN:  Not all treasure is silver and gold, mate.  You look like a man who appreciates a good drink.

SPARROW:  Can you sail under the command of a pirate?

SPARROW:  Do you have the courage and fortitude to follow orders and stay true in the face of danger and almost certain death?

SPARROW:  Good.  I can always use extra hands.  Let’s be on our way.

SARAH-JANE:  We need to review what we know about werecats.

NAPOLEON:  I only know about ligers.

JOHN:  I’ve heard o’ werewolves.  Are they anything like that?

PUDDLEGLUM:  Well, you can review what you know about werecats if you want, but I’m afraid very little has ever been known about them.

SARAH-JANE:  Can’t they change their shape?

PUDDLEGLUM:  That’s fairly obvious, though not as obvious as one might think.

SARAH-JANE:  I’ve been told that when Solembum changes from being a cat, he’s a boy with slanted eyes and shaggy black hair, and he weaves a sprig of holly into his hair.

JOHN:  Like that young fellow there?  (Points to SOLEMBUM who is walking past.)

SARAH-JANE:  (Gasps)  Excuse me, we’d like to talk to you.  (SOLEMBUM keeps walking.)

JOHN:  Hello there, young man with the holly black hair.  (SOLEMBUM turns around.)

SOLEMBUM:  Are you talking to me?

NAPOLEON:  Do you see anyone else with holly in their hair?

PUDDLEGLUM:  Perhaps you could tell us your name, unless you don’t care to tell us.

SOLEMBUM:  I go by many names.

JOHN:  Just your proper name, if you please.

SOLEMBUM:  If you are looking for my proper one, you will have to look elsewhere.  However, you may call me Solembum.

SARAH-JANE:  I knew it!  We’ve been looking for you!

SOLEMBUM:  There was no need.

SARAH-JANE:  But are you all right?  Angela has been worried about you.

SOLEMBUM:  I have been visiting my sister.  I am now returning to Alagaesia.

PUDDLEGLUM:  I hope that’s not too close to Narnia.

NAPOLEON:  What kind of skills do you have?

SPARROW:  Why is the rum gone?

JOHN:  Do ye not remember I had something better than rum?

SPARROW:  But why is the rum gone?

SARAH-JANE:  May I have some, please?

JOHN:  Sorry, me girl, it’ll be a mocha latte for you.

NAPOLEON:  Irish coffee sounds retarded.  I’d rather have a coke.

PUDDLEGLUM:  I suppose you wouldn’t happen to have any eels just lying about.

SARAH-JANE:  Captain Sparrow, we have found our missing werecat with your crew.

JOHN:  Have you noticed a decrease in your rat population aboard ship?

SPARROW:  Well, I hadn’t really noticed, but that is a good thing.  Fewer rats, fewer holes in my ship.

JOHN:  For Sarah-Jane to find the missing werecat and the Black Pearl become rat-free both in the same person, that’s fortuosity!

NAPOLEON:  Then all our wildest dreams have come true.

SPARROW:  I love a happy ending!  Drinks all around!

JOHN:  No shilly-shallyin’, no dilly-dallyin’, let’s ‘ave a drink on it now!