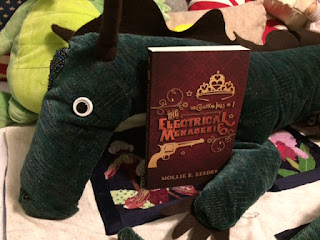 The Book Dragon has read The Electrical Menagerie by Mollie E. Reeder and gives it a resounding five claws!

My 5 star review: "Not sure I can do this book justice with a review, because all I want to say is, Wow! Great character development, a fantastic steampunk universe full of delicious details, and a plot that pulls the reader along with suspense, surprises, and shivers. The Electrical Menagerie is a must-read for those who like steampunk, and especially for those who have never read one. This book will make you a fan!

"Bravo to the author and her jolly good show!"

Because my review doesn't supply any details, here's the blurb to whet your appetite:

For fans of Caraval and The Greatest Showman: a quest for fame and fortune in a stardust-powered empire brings debt, scandal, and danger in spades. The Electrical Menagerie, one-of-a-kind robotic roadshow, is bankrupt. Sylvester Carthage, illusionist and engineer, has the eccentric imagination the Menagerie needs to succeed creatively — but none of the people skills. Fast-talking Arbrook Huxley, meanwhile, has all the savvy the Menagerie needs to succeed commercially — but none of the scruples. To save their show, Carthage & Huxley stake everything in a royal talent competition, vying for the once-in-a-lifetime chance to perform for the Future Celestial Queen. In this stardust-and-spark-powered empire of floating islands and flying trains, the Menagerie's bid at fame and fortune means weathering the glamorous and cutthroat world of critics, high society, and rival magicians — but with real conspiracy lurking beneath tabloid controversy, there's more at stake in this contest than the prize. Behind the glittery haze of flash paper and mirrors, every competitor has something to hide… and it’s the lies Carthage & Huxley tell each other that may cost them everything.
Posted by Katy Huth Jones at 8:17 AM