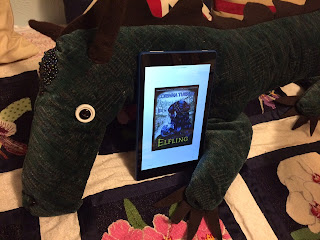 The Book Dragon has read Elfling by Corinna Turner and gives it 5 claws!

My review: "4.5 stars for this gritty and realistic fantasy set in historic England. The MC Serapia captured my heart in the heartbreaking opening scene. Her struggle to survive on the streets after her mother's death makes her strong but doesn't destroy her fiercely loyal and loving heart. Once she finds her father and the love she'd only dreamt of, everything is again threatened by a monstrous evil, and Serapia's toughness and tenacity learned on the streets becomes vital as she embarks on an impossible quest to find healing for her father's body and salvation for his soul. The many flashbacks of her time with the elfin were a little distracting and felt like a second narrative, but they were a clever way to show how Serapia's memories manifested themselves in unexpected bursts. The climax nearly stopped my heart, it was so intense. I would rate this book PG-13 for the violence, although it never went over-the-top, considering the subject matter. I loved the dragonets and only wished to see a glimpse of the larger dragons. Recommended for older teens and up!"

This book is featured at Catholic Teen Books, along with Ms. Turner's other YA books.
Posted by Katy Huth Jones at 4:00 AM